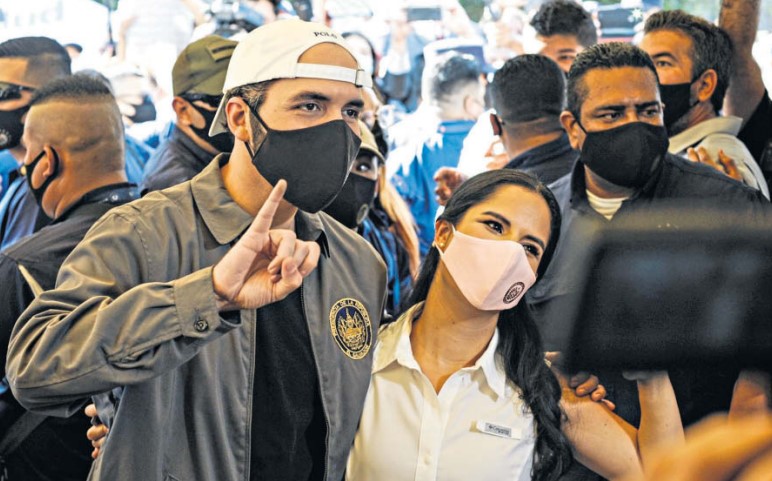 When El Salvador’s millennial president ordered the armed forces to take control of Congress, the world looked on in horror. Gun-toting soldiers intimidating MPs to approve a loan for new military hardware was widely interpreted as one of the darkest moments in El Salvador’s history since a civil war ended in 1992.

But a year later things have somehow taken a turn for the worse. Nayib Bukele, the leather jacket-wearing former advertising executive labelled the “hipster Donald Trump”, this month sacked supreme court judges and the country’s attorney general, tearing up what little is left of the democracy he took charge of International condemnation followed. Yet, inside the country of 6.5 million people, the popularity of Central America’s newest “dictator” grows. Despite a rapid dismantling of democratic institutions, Mr Bukele’s approval rating has soared as high as 91 per cent.

“Bukele is one of us. He’s a man of the people,” Omar Ticas, a 32-year-old telephone salesman said. “If what we had before him was democracy – well, democracy isn’t working for us. We need something harder.”

Support for Mr Bukele’s bareknuckle populist politics was shown in a recent poll in San Salvador, the capital, which found that more than 30 per cent agreed that an authoritarian government may be necessary “in some circumstances”.

Many voters credit the president’s security policy with helping to bring down endemic gang violence. He has introduced permanent military patrols, endorsed the use of lethal force by security forces and increased solitary confinement in prisons. According to Mr Bukele, violent deaths in El Salvador have fallen from 50 per 100,000 people when he was elected to almost 19. But his political opponents say this relative peace has been brought about by a secret pact with the most powerful of El Salvador’s gangs, the Mara Salvatrucha, a claim the president denies.

Mr Bukele, 39, came to power in 2019 as a political outsider. His baseball caps, sunglasses and savvy use of social media set him apart from the increasingly hated political establishment tainted by corruption. His publicity experience led to the slogan: “Let them return what they have stolen,” which has become his mantra.

Mr Bukele, who likes to remind his social media followers he used to run a nightclub, describes himself as the “coolest president in the world.”
But his critics accuse him of being obsessed with his image and transfixed by his mobile phone.

The son of a Muslim father from Bethlehem, who was a driving force behind the construction of some of the first mosques in Latin America, Mr Bukele has never clarified whether he is Catholic, Muslim or an evangelist, stating simply: “I believe in God.”

When he withdrew the armed forces from congress last year, Mr Bukele said nothing to his people. Instead, he raised his finger to the sky, indicating the order to back down had come from above.

During the pandemic, the president has championed cash grants and free food distribution to the most needy. His draconian lockdown, which allowed residents to leave their homes only twice a week to shop for food, drew criticism from human rights groups, but not from voters.

“I don’t get why there’s so much drama around this,” said Teresa Carballo, an unemployed mother of four from the city of Santa Ana. “He won the election. We, the people, chose him. So how can it be undemocratic?”
Recent events have heightened tensions with Washington just as Joe Biden’s administration tries to tackle the rising number of migrants fleeing El Salvador, Honduras and Guatemala.

Antony Blinken, the US secretary of state, expressed his “grave concern” about the removal of the judges and attorney general. Speaking to Mr Bukele by phone, Mr Blinken said an independent judiciary was essential to democratic governance.

“If anyone in the Biden administration had any hope that Bukele was somehow committed to democratic rule,” tweeted José Miguel Cruz, a political analyst. “He is not. He never was.”

Human rights groups are calling for the International Monetary Fund to pause negotiations on a key loan to El Salvador, or for the United States to condition its development aid on the country’s commitment to its institutions’ democratic health. But these are tricky options: Withholding loans or aid could increase economic instability, generating more migration.
Mr Bukele showed his contempt for the international outcry the day after the vote to remove the judges. “To our friends in the international community: We want to work with you, and help where we can. Our doors are more open than ever,” he posted on Twitter. “But with all due respect: We’re cleaning our house … and it’s none of your business.”